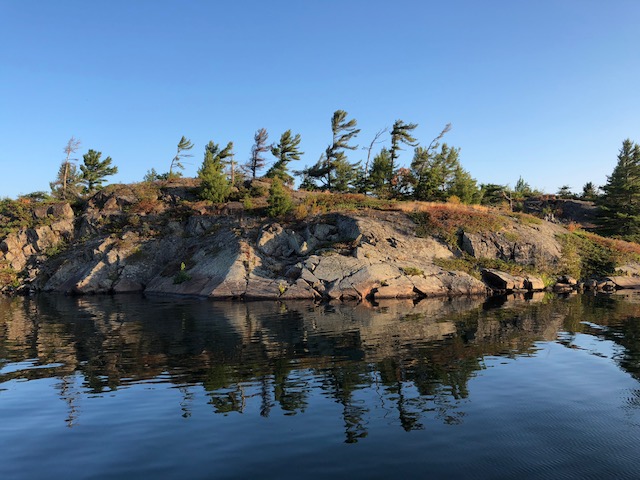 Windswept trees, with branches permanently pointing south, stand as a reminder that weather conditions can be harsh. A stark contrast to the calm, blue waters. 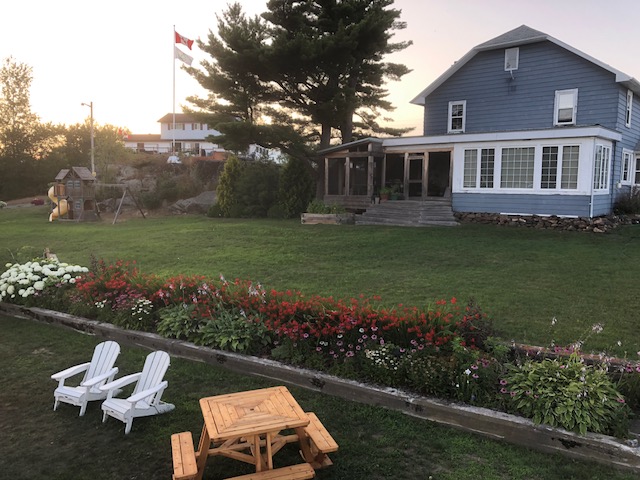 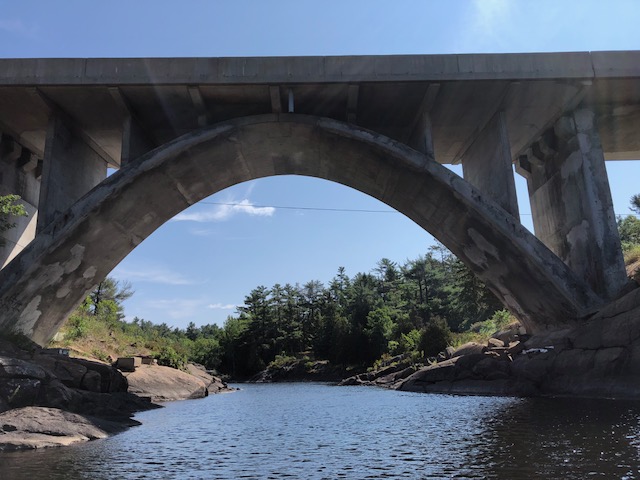 The fires in Ontario covered 11,000 hectares (a metric unit of square measure, equal to 100 ares (2.471 acres or 10,000 square meters).  We planned our route carefully to avoid the fires, omitting stops in the Bustards, among others.

Along with Gypsy, we found a perfect anchorage in Collins inlet, which included another delicious meal prepared by Rick and Jim on the boat.  Yummy Fresh Fish! 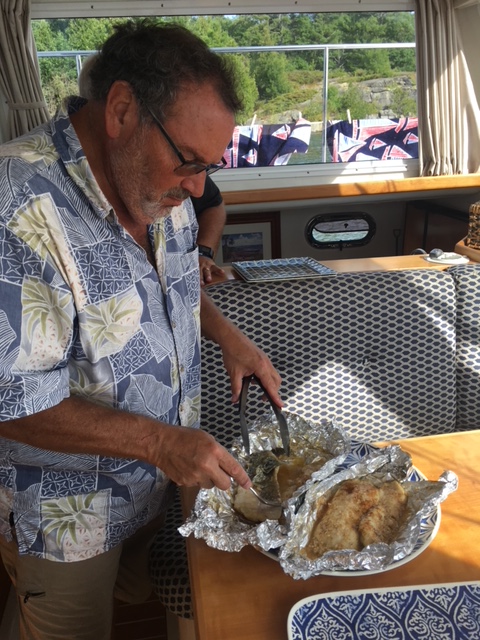 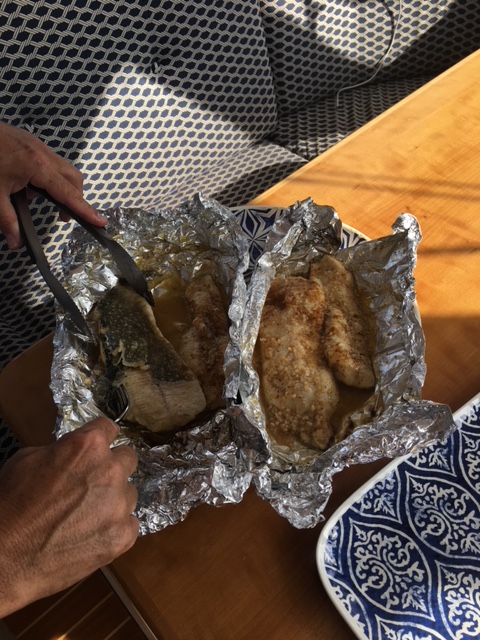 The rest of the saying goes, “red sky at morning, sailors take warning.” 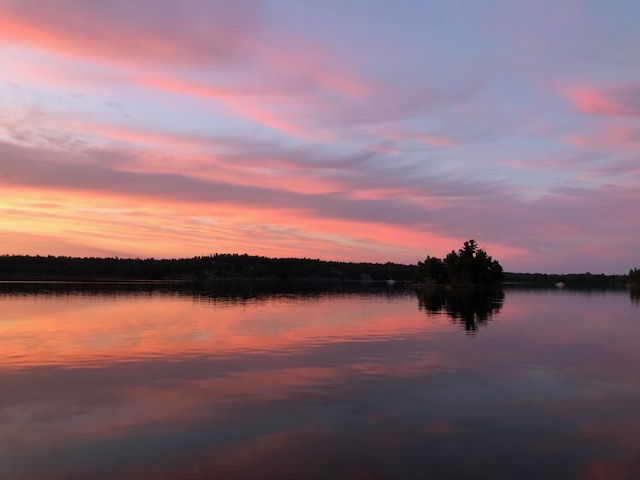 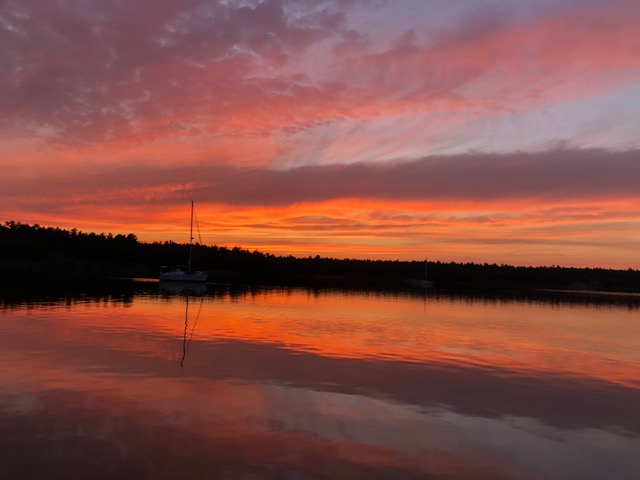 Our careful planning was foiled by Mother Nature, again. The winds shifted while we were sleeping, and we awoke to the smell of heavy smoke.  Don’t be fooled by this photo, the boat was NOT surrounded by fog.  Photo by Gypsy

Killarney was a popular refuge from the fires, including a rendezvous of boaters from Gross Point Yacht Club, that made Exhale look like a toy boat.

What a magical little place to watch float planes come and go.  We loved the strategically placed red chairs at the end of every finger pier – a great little place to enjoy a nice glass of wine on the dock 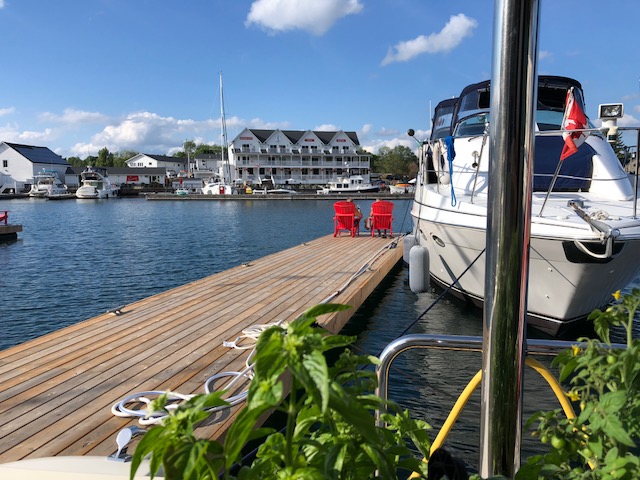 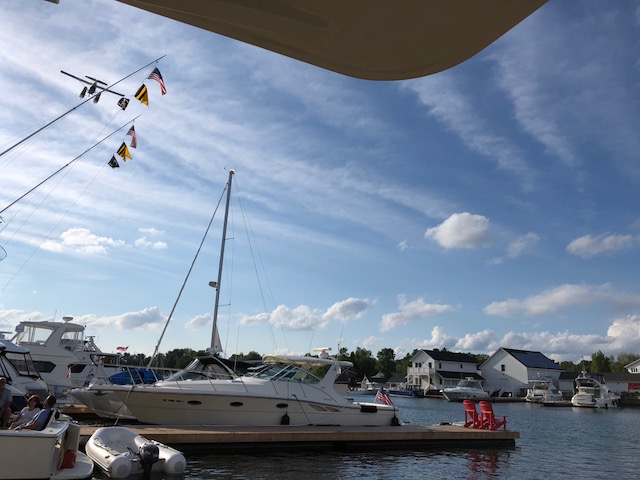 Possibly one of the best meals we have eaten on this journey was at the Mountain Lodge in Killarney.  Thanks, Gypsy captains Susan and Jim Merritt, for an amazing evening. 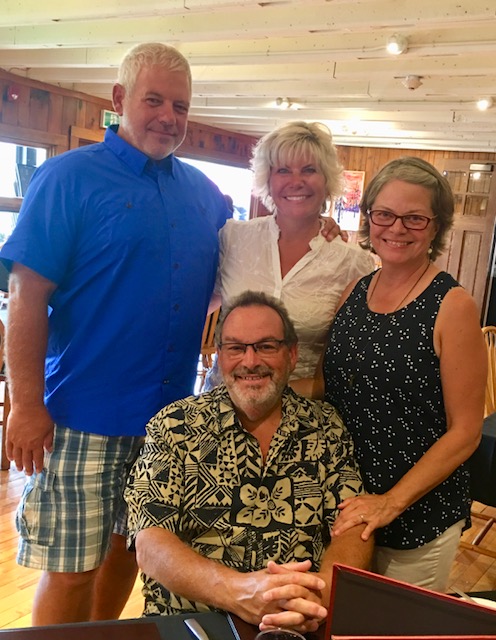 Shelter in a a Storm 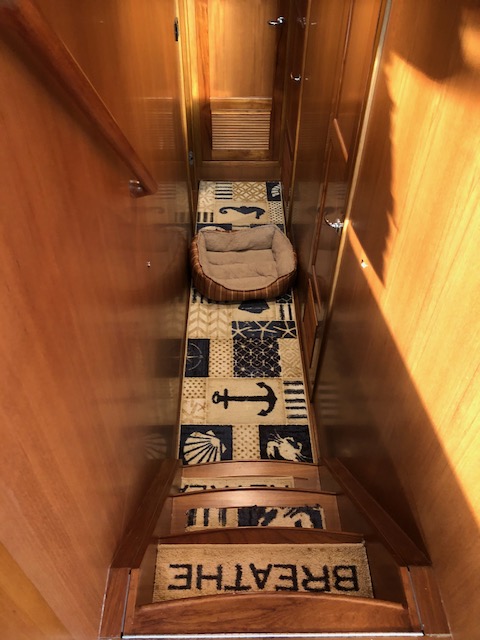 While we were out and about, there was yet another flash thunder storm.  It turns out, Maddie is very resourceful when it comes to seeking shelter. She successfully moved her little bed from the side cabin into the hallway – logically the most protected area of the boat!

Exhale spent a second night in Killarney, a three-mile dinghy ride from Covered Portage, where Gypsy was anchored out. 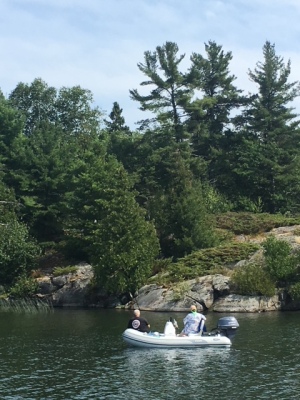 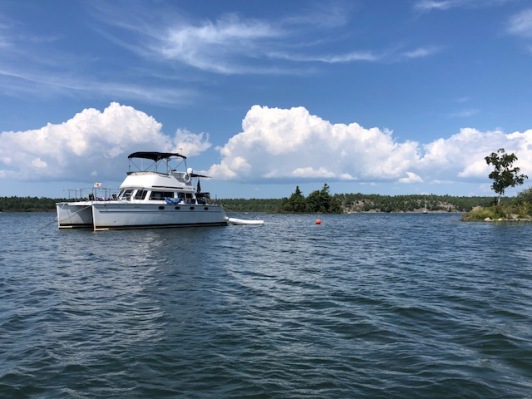 We watched a pair of happy-go-lucky otters playing in the water nearby, wishing they would get close enough for a clear photo.  An ominous growling noise meant not one, but, two otters were climbing onto our dingy.  When one of them slid onto Gypsy’s swim platform, bearing snarling teeth, my thought was “danger, danger, Will Robinson.”  Well, at least the fat critter brought his own dinner.

Traveling with Gyspy, we anchored out at Baie Fine, then hiked back to Topaz Lake. Thanks for pushing us Jim and Susan, it was well worth the climb. 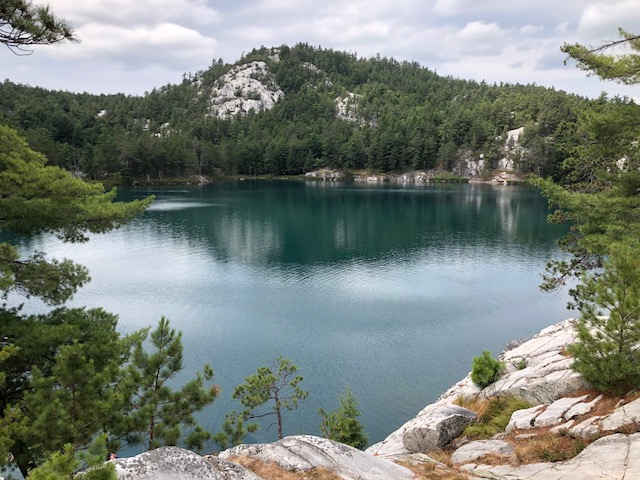 Rick finally tried out the homemade bobber action, to neatly mark the location of our anchor.

Anchoring in Florida is predictable – sand and more sand.  In Canada, sometimes it’s mud, sometimes it’s rocks, and sometimes, well, it’s something else.  As we pulled up the anchor, look what came with it!

Our visit to the marina at Little Current coincided with the annual Haw-eater Festival, highlights included antique cars (this GTO is for my Bear-Bear) and a parade that lasted roughly 12 minutes, well, maybe slightly longer.  My favorite was the excuse to sample yet another delicious craft beer. Loved this Split Rail Hawberry Ale (yep, another red). 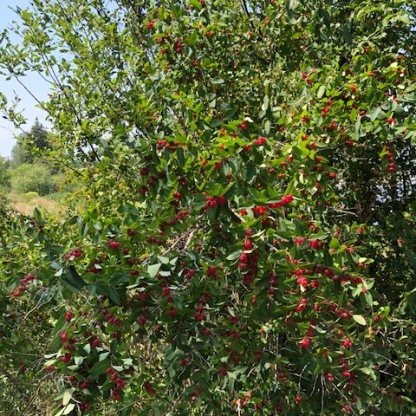 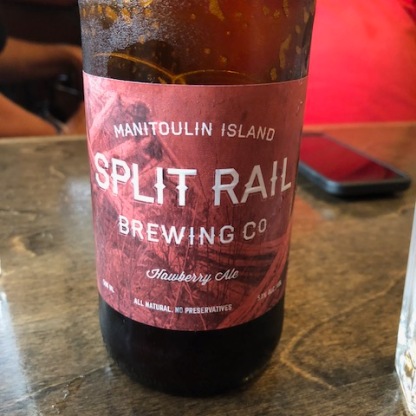 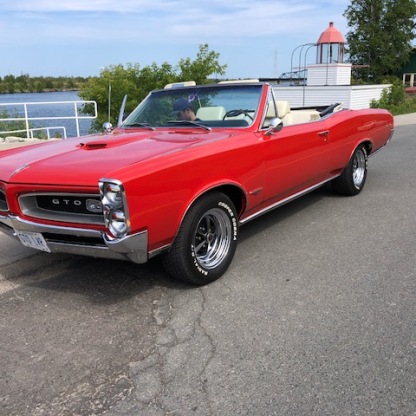 GTO for my AK Bear-Bear 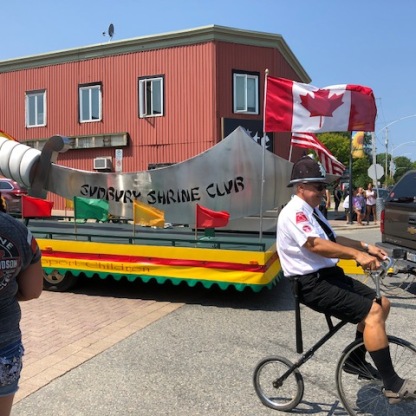 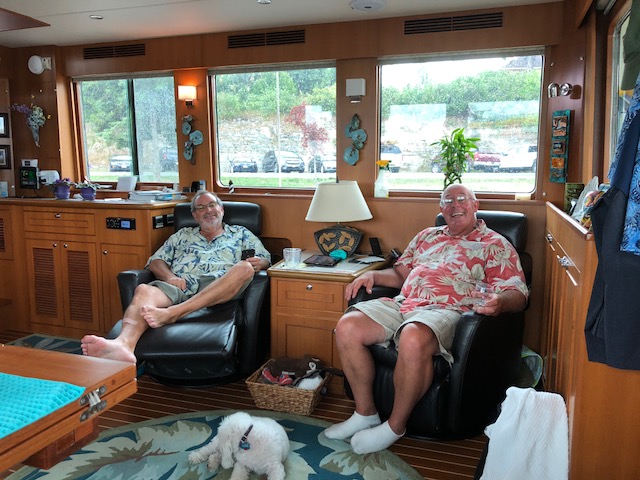 Reunited with Houlegan, again, we watched the fireworks on Civics Day.

Found: One Elusive Unicorn.  This is for Rick. 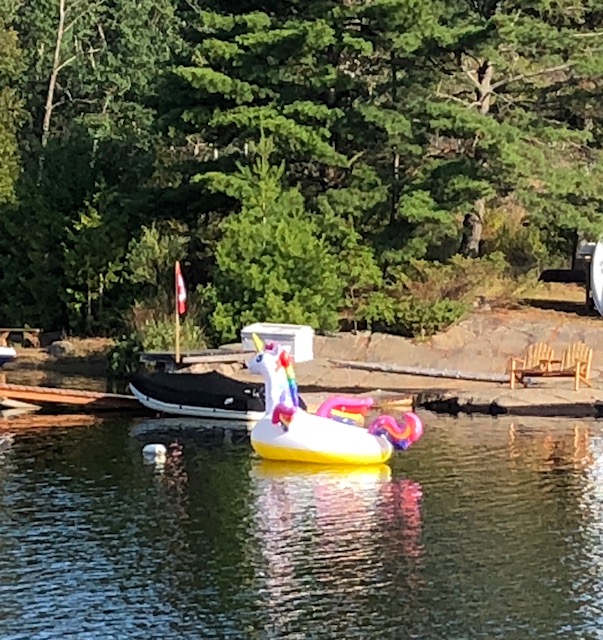 ANOTHER MESSAGE TO OUR FAITHFUL READERS: Thanks to those of you who reached out this week (especially Craig). You are right, the blog postings have been rather irregular.  As we journeyed the north channel of Georgian Bay we were completely out of range, for multiple days. Ah, yes, it is good to Exhale 🙂

Finishing up the North Channel, Clearing Customs, then on to Michigan – Go Blue!