During the 19th century, oyster beds in the New York Harbor became the largest source of oysters worldwide. Can you imagine six million oysters, every day, on the barges tied up along the city waterfront? And, at the time, oysters were cheap and mainly eaten by the working class.

A bucket of live oysters

Meet fellow boaters, Joe and Cathy Davenport.   They have a bed of oysters on their dock in Deltaville, VA! Let’s just say, there was NO doubt about the freshness of the oysters!

Joe taught Rick and Rodger how to harvest and shuck the live oysters. Given how much we love oysters, that’s a skill that could come in handy for a long time!

Thanks Cathy! Your Oyster Rockefeller was oh, so, delicious.

Of course Reality’s dinghy (they call it a dink) is named “Check”.  Maddie wasn’t so sure racing was a good idea …

Do you really think it’s a good idea to race?

Lorrie & Rodger on their dink, “Check”

This week we cruise the waters of Chesapeake, stopping first at St. Mary’s, Maryland, to anchor out with Reality. 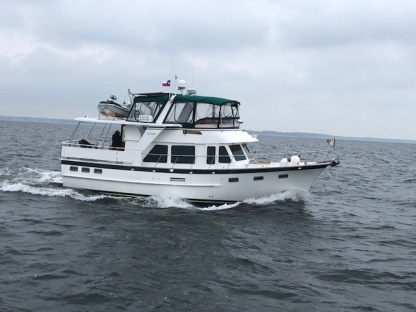 Reality on the Chesapeake

By the way, we are in Maryland!

We don’t have a plan, and we might not have good cell service – but you can be sure we will be having a great time with these guys! Enjoying our sixth state on the loop.

Enjoying the Chesapeake, anchoring out with Reality [Check]; slowly going north towards Baltimore (see you there, Donna), after a side trip to Los Angeles – see you soon, Danielle, Sandra and Mija!

2 thoughts on “Shucking Oysters in the Chesapeake”