After enjoying the gentle pace of the provincial lifestyle in the islands, the manic activity in Nassau Harbor was an adjustment.

We walked with the Bernstein’s from the Nassau Haven Marina to historic downtown. Along the way we found colorful murals. 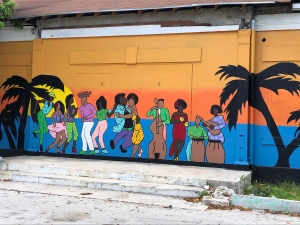 To Sir, with love 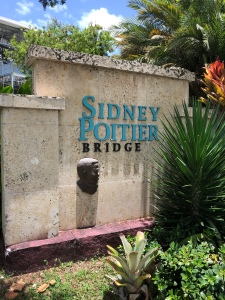 It was exciting to discover the bridge to Paradise Island was officially named after the globally renowned Bahamian, beloved Oscar-winning actor Sir Sydney Poitier. My favorite of his movies are Guess Who’s Coming To Dinner, and, To Sir, With Love. Born in 1927, yes, he’s still alive. 💕

Officially draped for Independence Day. Forward together, upward, onward. One people united in love and service.

The flamingo-pink buildings in Parliament Square were constructed in 1815 by the Loyalists.

This fish tank is for Tyler. And Eric. Sushi time!

Background of Atlantis. The property was originally part of the Paradise Island Hotel and Casino, which opened in 1968. It was owned by Resorts International, a Merv Griffin company. In 1994, Merv sold to Sol Kerzner. Kerzner created Atlantis on the site over the course of the next four years, spending over $800 million to build the massive resort. The resort was expanded in 2007. 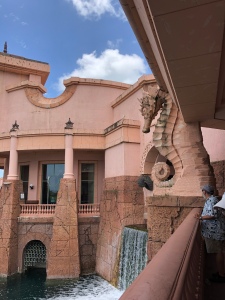 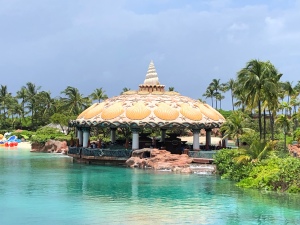 This craft looks like it belongs in either a Bond film or a sci-fi movie. I imagined it could rise into the air, at warp speed. To my friends with security clearances, can you shed some light?

Zoom in. Look closely at the stern of this craft. Is that a Machine gun or dinghy lift? You decide.

Fun factoid – Paradise Island was formally known as Hog Island, until savvy developer, Huntington Hartford renamed it in 1962. He successfully convinced parliament wealthy tourists would prefer to spend money in paradise, rather than on an island for swine. 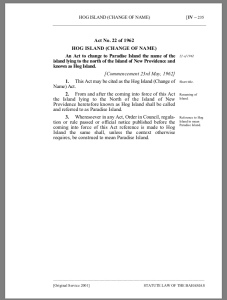 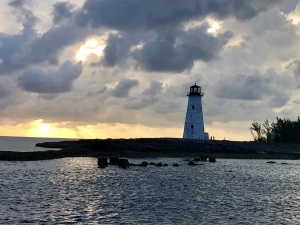 Built in 1817, this is the oldest surviving lighthouse in the West Indies. It is located at the western tip of Paradise Island, marking the northwest entrance to New Providence and the Port of Nassau.

Next up: Chubb Cay

4 thoughts on “Nassau and Atlantis”