We arrived at a fork in the road.  For months we had agonized over the better route, “Erie or Champlain?” The challenge: several fixed bridges on the Champlain route (bucket list preference) restrict access, causing most loopers to opt for the Erie Canal route (Plan B).

In 2017, the Erie canal celebrated its 200th birthday! Originally 4 feet deep and 40 feet wide, it successfully floated boats carrying up to 30 tons of freight.

If you want to learn more about the Erie Canal, click here.

The original canal runs along side the enhanced canal which is now 70 feet wide and 7 feet deep.  Now it can handle boats carrying up to 240 tons of cargo. 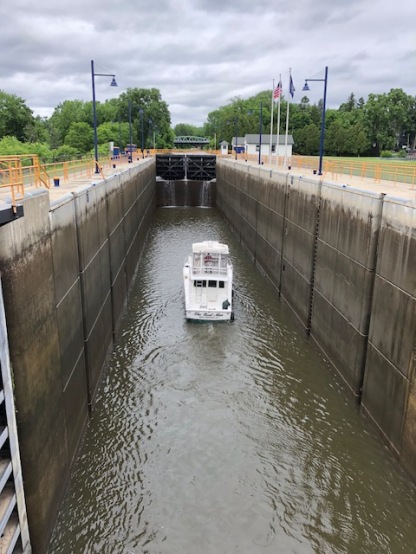 The “air draft” (height) is measured two ways – first with all the electronics in place (Exhale is 19’3″),  second with everything you can possibly remove lowered from the hard top –  radar, radio antennae, wifi, you get the idea. The measurement changes slightly when the water and fuel tanks are full as well as when there are people and provisions on board – don’t worry Maddie, you and your food won’t make much difference, Donna’s luggage on the other hand might have …. Our air draft was 17’2″ after we took everything off the hardtop.

Many of our boating friends were avoiding the Champlain route, frightened off by a 17′ fixed railroad bridge near Whitehall.  During the AGLCA rendezvous we heard the water levels were low, making that bridge height more like 17’4″. If it did not rain heavily we just might make it. Not a lot of room for error.

Plan B was to take the Erie Canal. We docked on the wall at Waterford, gateway to either route, planning to measure the boat, again, to consider our options.

WWRD? So glad you asked, Rick successfully connected with the NY Canal Section Superintendent, Timothy McInerney. He’s the guy who gives direction to “raise and lower the water pools” 🙂 We were shocked when Tim arrived at our boat in Waterford, and elated when he said, “Go for it!” We would reach the lowest bridge by mid-day tomorrow, worst case we could turn back.  We were even more impressed when he not only was at the first lock of the day, but he drove ahead to all of the low bridges, to monitor, and cheer, the nail biting journey!    Traveling with loopers HMS/Vagabond and Houlegan Again, we took off early in the morning.

Our trusty crew member, Dave Floyd, aka Almost #8, is 6’2″.  He volunteered to monitor the hardtop. We nervously drifted under the bridge, down below Capt Rick was prepared to throw it in reverse if there was any danger of getting stuck.

Houlegan (We call them hooligans and shenanigans) decided to measure as well.

It was smooth sailing under the second low bridge, again, nearly two feet to spare!

In between bridges we went through a total of 12 locks in the Champlain Canal.  Our Guardian Angel, Pilgrim HMS/Vagabond, stayed close all day. 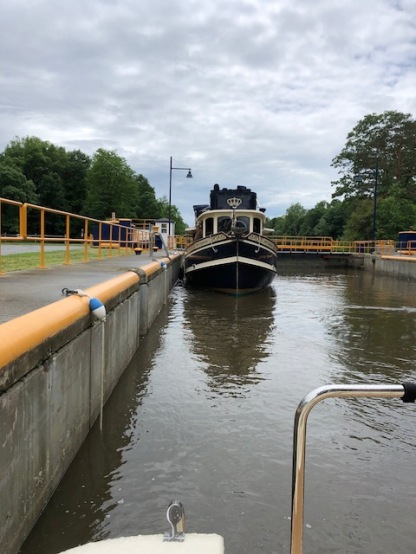 In Fort Edwards we were surprised to discover the flood control gate was not fully raised to it’s normal height of around 25′.  We think it was closer to 18′, and it looked like a deadly guillotine.  Yet another nerve racking moment. 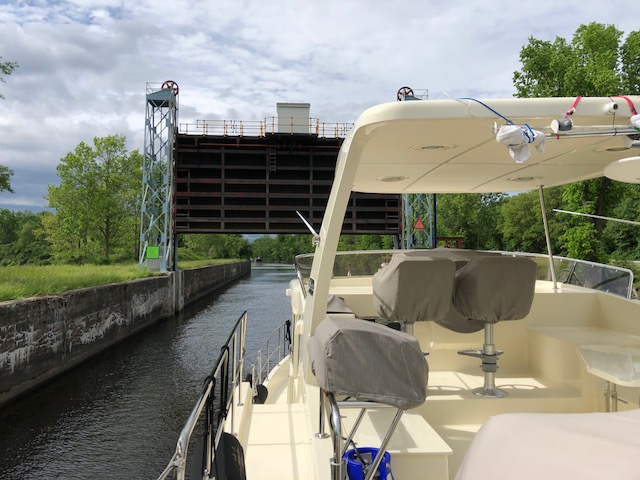 Along the Champlain Canal we noticed a growing trend of lawn sculptures – apparently to detour pesky geese and other critters.

We were happy to see Canal 8, brought to you by #8.  Yes, Mo, the little paper bag on the shore is special dock trash.  This one contained a mini bottle of Titos and a granola bar – breakfast of champions. 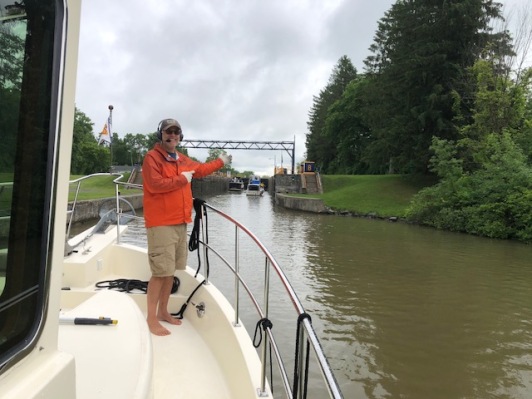 There she was, the infamous 17′ Railroad Bridge.  With Houlegan Again and Vagabond slightly ahead of us, we took it really slow.  They told us later they were all going to jump on our boat, for extra weight, if we got stuck.  Photos from both boats show how close it really was –  we made it!!

Thanks, Tim – for lowering the water pools – and for escorting us all morning, you are one in a million!

Thanks to the handy work of Rick and Dave, we were back in business.

One thought on “Locks & Fixed Bridges – Time for Plan B?”

Our boat dog:  Maddie Sue is a malti-poo (Maltese Poodle mix).  A rescue dog from Long Beach, CA, she loves being on the water.

The trawler:  North Pacific is based in Surrey, British Columbia, CANADA.