The pilgrimage to Boo Boo Hill is an adventure best timed at low tide, since the trail is completely washed out at high tide. 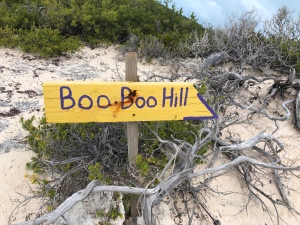 Tourists from around the world leave carved driftwood at the top of the hill, in memory of the souls lost at sea, or, to commemorate their visit.

Rick said the pile would make a heck of a signal fire for the lonely park staff stuck on the remote island.

The view was spectacular

Thanks, Gail and David, for taking us snorkeling, several times, around Warderick Wells Cay, we even saw a hog fish Tom and Faye!

Tragically, this 52 foot Sperm Whale was found dead on the beach, with plastic in its lungs. 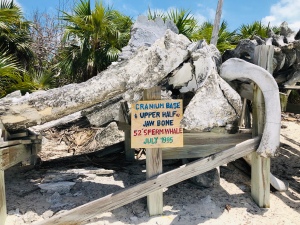 What a magical day! Climbing, and snorkeling, followed by a flash rain storm – also known as a fresh water bath for the boat. Gail suggested we have rum cocktails on the beach – with submerged beach chairs and umbrellas in the water. Best of all, Gail made her Malaysian style seafood fried rice for dinner. Special dessert was Chocolate covered pretzels. Wow! Wow! Wow! Life is good.

We anchored out at Norman Cay with Tonto’s Reward, the most notorious island in the Bahamas.

A member of the infamous Medellin Cartel, Carlos Lehder began taking a shine to Norman’s Cay in 1978. Remote enough to remain relatively inconspicuous, while also still within close proximity of the U.S.Within short order, he purchased large portions of the small island, drove off the local population, and effectively took over.

In the late 1970’s, drug kingpin Pablo Escobar erected a fortress in Norman Cay, protected by armed guards and surrounded by attack dogs, most notably constructing a 1000m-long runway, at a strategic point for drug runners to rest and refuel on their way to the United States from Colombia.

Today the anchorage at Norman’s Cay is best known for the Curtiss C-46 Commando that landed well short of the runway in 1980. Now a popular snorkeling site, the sunken WWII-era military transport plane was used to fuel Escobar’s expanding cocaine trade to the USA.

Yet another magical day

Next stop: Highborne Cay, maybe. Subject to Change, for sure.